To get information relevant for your region, we recommend visiting our European website instead. 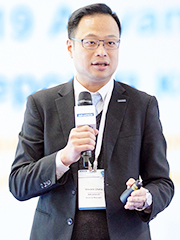 Vincent Chang joined Advantech in 2002 and served as product manager and product Sales Manager of the Industrial Automation Group. Since 2007, he joined NEXCOM as Sales Director in China until 2011. Thereafter, Vincent worked as Sales Vice President for Colavia, China. During this time he refined sales and marketing strategies to gain market share from the competition and achieved several major business goals.

Vincent re-joined Advantech Industrial IoT Group in 2014, growing the business in ASEAN, India, and Australia regions with double digital growth in three consecutive years. Vincent’s responsibility expanded to Russia in 2017, where he re-built the local organization and successfully reversed the four-year business downturn, then reached double-digit growth by the end of 2018. Simultaneously, Vincent was appointed General Manager of ARU and established an operations infrastructure in such an efficient way that it gave the ARU office a much higher profile as a regional company. During the same year, Vincent was in charge of ME&A and appointed General Manager of ASEAN, where he effectively facilitated cross-sector collaboration in terms of productive outcomes of new business in Malaysia and Singapore.

Having accomplished strategic joint venture breakthroughs in Vietnam (2018), Turkey (2019), and Mexico (2020), Vincent contributed to Advantech’s global business expansion with three new RBUs. Under his skillful leadership, these new JV RBUs quickly adapted to Advantech’s operations and business structure in an effective manner, and have since performed very profitability. Recently, Vincent was appointed as the Managing Director of AInterCon region in Oct 2020, with the strategic mission to progress Advantech’s globalization with local competence business strategy and develop AInterCon as the incubator and driver for emerging business; he will lead AInterCon team to advance into a comprehensive, agile, and professional business organization.

대한민국
Panel Button
Visit the Advantech Global website, or choose your country or region below.